Shaving cream. It’s something I’ve been thinking about for a while, reading other people’s blogs about how fun it is and a good resource for sensory play. But I didn’t trust it.

I tried that whole put a bar of Ivory soap in a microwave experiment – let’s just say it was a big mess and involved at least 3x  5x more clean up than actual play. So I was wary.

Since it’s summer and we have a water table, I thought this might be the perfect opportunity to buy one of those dollar store cans of shaving cream & see what happens.

Here’s what we did.

We started with paint brushes of various textures and shaving cream mountains. In less than one minute, the table was covered. Uh-oh, I thought. This was going to lose its appeal in no time.

But then the magic happened. The kids quickly transitioned to spreading the shaving cream along the deck railings. (We had a not on the floor rule — too slippery)

One trick I’ve learned with open-ended play is to only begin with some of the supplies. We began with a dry table, shaving cream, & paint brushes. Once I saw that interest flagging, I brought out the next element: water. 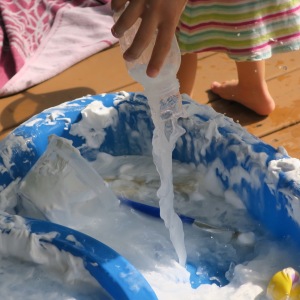 They started pouring, mixing, experimenting with different consistencies, and even took their brushes and started cleaning off the cream they’d just spread. Lots of good gross and fine motor as well as sensory input was happening here, but we weren’t done.

The paint brush cleanup of the railings allowed for some great crossing the midline activities, and all the mixing and pouring was a rich source for bilateral coordination.

We then added a spray bottle filled with water, good for grip strength, shoulder stability, eye-hand coordination, and look at that bilateral coordination!

In the end, all 3 returned to the table, playing with the slop they’d created by thinning out the shaving cream with water. E was watching how the force from her spray bottle propelled the other liquid forward – easier to observe in the grainy solution rather than pure water, and J & E were cooking up concoctions and pouring and stirring, using their imaginations.

We were out there for about an hour, and they ended up cleaning up most of the mess themselves in the midst of their play.

It was fun. We’ll definitely pull this out some other time.

This last year, I’ve been immersing myself in the OT world of sensory input and motor skill development, and the thing that amazed me was that I now had the eyes to look at what my kids were doing and to see the purpose in their play – not because I dictated what they must do but because they sought it out themselves. And it was wonderful.